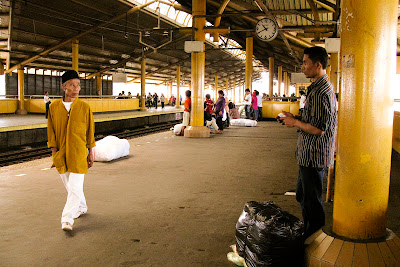 I had no business on Monday so Ilham came by again and we headed off by train to another Jakarta weekend getaway called Bogor.

This place was once called Buitenzorg by the Dutch, and from time ‘immemorial’ it has been one of the preferred places for Batavians, Jayakartans and Jakartans to spend time in. Its only an hour away from Jakarta by train, so very convenient for everyone.

We had time to wait at the station in Jakarta, so it was interesting to see the people come and go. Mostly they were commuters, but some were families visiting and others were local traders bringing or taking their bagged produce from one stop to another.

The train we took was a simple commute train with narrow wooden benches along the carriage walls and a large open space where the start and end of the daily grind of city work plays itself out. Traders strode up and down the train offering their wares – drinks, snacks, gadgets and things.

One trader offered up a poem to the passengers in return for small change. Didn’t understand a word but his delivery was most exuberant and effective. To me it brought back a memory of what I’ve read in tales of old Islam – the ancient appreciation and respect for literature and poetry – and for those who recount them.

She jumped into one of the minibus taxis; these have room for about eight people but most times the driver manages to squeeze in ten or twelve. The roof is low, so for someone like me, who jumped in straight after, legs are pinned and head is not far from knees.

We zoomed around the center of town, past the main shopping street, square and entrance to the President’s summer residence, finally stopping beside the gate of the large park that surrounds the residence.

This park was first laid out by the Dutch (the residence was once the Governor’s) and has been maintained through time. As before, its serves as the lungs of the city, a place to break away from the constant clash of commuting and a place to see some plants from other parts of Indonesia – and indeed the world. 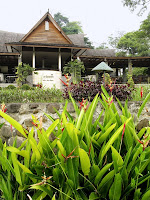 The gate we were planted by the minibus at was closed, so after my attempt to climb over the spiked railings failed (I was told to stop, I would be arrested and I was embarrassing everyone, not that they would say), we walked up the hill to another entrance that was open (with payment of ticket) and headed over to a bungalow set on a low hill that serves as the park’s restaurant.

Great beams of teak comprise the greater part of the restaurant, from its columns to its railings, all standing on a cool grey stone floor. There were some guests – Dutch and Australian if I heard them right – otherwise the place was mostly empty.

In fact I was surprised it was open at all, given that we are in the middle of Ramadhan. Again, the relaxed way with religion – those who want to observe, may; those who don’t, need not – impresses me, and is a pleasant counterpoint to the in-your-face variety that Malaysia pushes. Not the Indonesia is one whit the less religious. 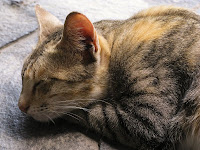 Lunch over and the resident cat suitably disappointed at not receiving any, though it did lounge most cutely at my feet for a while, we walked through the park with one purpose – to find the rotten-egg flower.

This flower is a monster, almost 2 meters across, it rises out of a thicket of leaves like a dark pink bomb, only to break open and with its stinking sweat scream ‘Feed me!” like some freak creation in a florist’s shop.

You would imagine we just needed our noses to find this one, but apparently this is not the flowering season. Over a bridge that crosses one of the streams that run through the park, itself fetid with the detritus thrown in from city streets above the park, we asked several people who I think work there.

The result of their counsel was to walk a giant pretzel shape around the park, admiring flowering shrubs, fans of palm trees, the back entrance to the Residence and even a swinging liana which I did my best to Tarzanize (to the exasperation of the others), but no flor horribilis.

No luck then. We could see the horizon darkening with rain clouds so it made sense to head back to the streets and grab another knee-cracking minibus back to the station. A commuter trip back to Jakarta and I was ready for a long shower and a lazy evening. 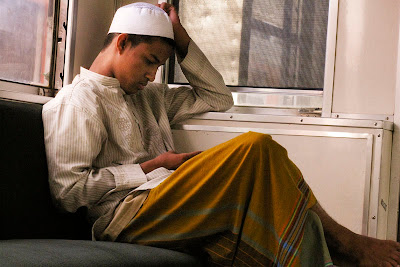