I booked into the Hotel Puri, which sounded good on its website as it prides itself of being a family run business in an old merchant house.

There is little trace of the house, which evidently was owned by one of the city’s trader families about 150 years or so ago. But it certainly has character and is notable by its tiled atrium, its garden and one room leading on to the garden where the local version of swifts have built their nests.

“Is it the tradition here that having birds nest in your house brings good luck?” I asked. “Indeed so.” came the answer.

I threw the bags on the bed, checked the TV for news and the internet for a connection. All OK.

When I walked out of the hotel to stroll around town in the evening, I found myself totally overcome by the magical beauty of what I saw before me.

Almost all the houses in the street were lit by strong red lights, fixed to key points of each one, of every one unique and splendrous. I drifted through this part of Melaka (which I discovered to be its Chinatown and formally its Dutch residential area) without an idea of where my feet were taking me, my eyes drawn to the delight of another corner, another building, another splash of red.

Absolutely wonderful. I asked for how long this had been the custom and I was told that it only began last year. Long may it continue! 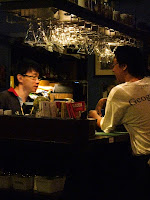 During dinner at the Geographer’s Café (well I couldn’t resist, could I?), as I sat at my table looking out onto the street, a young rickshaw runner parked his tinsel-and-flower decorated vehicle on the sidewalk opposite and propped himself against it. He shot a glance over to me, I to him, and so on at least five times. I raised my glass of fruit juice to him, he smiled. As I paid the check I asked the waitress how much a rickshaw was. “About 20 ringgit an hour” she replied. So I paid her and wanered over to the rickshaw wallah.

I see you have been waiting for me”, I said with a wry smile. “Indeed so Sir” he replied. “So tell me, how much would it be for a short ride late at night as it is now?” “For you 20 ringgit an hour – I can take you to see all the tourist attractions and tell you their stories.” “Since this indeed is the price I have heard is the rate, then I am happy to take a short ride with you. That way tomorrow I know where to go to take some photographs.” “Are you a photographer Sir?” “Not really, it is my passion and hobby, and occasionally I sell a few, but this trip I am just a tourist and don’t have my good camera with me. And do please stop calling me Sir.” “Of course Sir.” was the inevitable reply.

Khaleed, I learned as he pedaled me round town, was an electrical engineering student who worked as a rickshaw guy in order to put himself through college and earn a little extra cash. The rickshaw was his family’s, which in fact owned two more. Third son of six children, his family came from Melaka and his father worked as a tradesman, as I recall. Khaleed’s English was excellent and his manners a privilege to be honored with. But he couldn’t stop calling me Sir. Terrifying, that. I ain’t old enough to be a Sir.

His pleasure in showing me the old town was evident as he told me the story of the place. Most corresponded to what I had read but it was fun to stand at midnight by ‘A Famosa’, the very last vestige of the Portuguese fortress, and be told its story again, and by the Malacca tree and be told the three tales as to how the city got its name. 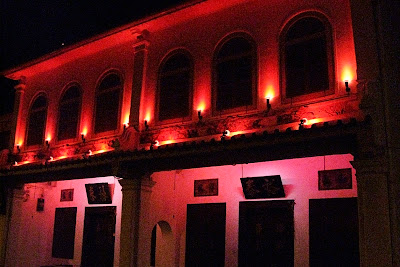 I learned something new too – the building in which Malaysia’s independence of the Brits was signed in 1957 lies just across the square from ‘A Famosa’, the first European edifice in the Malaysian peninsula. This must have been deliberate. Every act of the independence is much cherished, as indeed it should be. Even the car the new Prime Minister was driven in has been preserved under a broad canopy. The building is now a museum celebrating the county’s independence.

Having seen earlier the old tombs behind the old Dutch Stadthuis (where I was told the story of the secret passageway, the sultan took to escape the Portuguese when they took Malacca Island in 1511, we ran up the steps to the top of the hill on which stands the ruins of the old Portuguese church. There Khaleed told me the story of an English teacher who centuries ago once taught at the school he attended (it was founded in 1824) and whose gravestone was on the hill. We read it by torchlight, to discover that, though the family name was hers, the tomb wasn’t – but the story of a young family, lost in the space of just a few years, was infinitely more tragic. 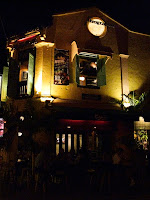 Within the walls of the church, its roof the stars in heaven, we could make out immense slabs commemorating the lives of Dutch merchants and garrison commanders, fine words with finer flourishes on hard grey stones. A water filled, oblong hole protected by a chicken wire cage under the vault of the apse was the one time resting place of Francis Xavier, the Jesuit priest who traveled as far as Japan.

Then I made my own little discovery, one which took me back exactly 40 years to another time and another continent. The wife of Jan van Rieckart, founder of Cape Town, was once buried in this church. I remember him – I learned all about him when I went to school in Cape Town back in 1968. My oh my.

I always knew Malacca to be one of those almost mythical places in history where traders, travelers and treasure are mixed and mingled. I did not for a moment imagine that this was the crossing point of Zheng He, Albuquerque, Magellan, Xavier, Tasman, van Rieckart and van Diemen. How privileged I am to stand on this very hill where every one of them stood at one time in their lives. 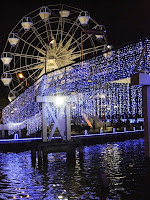 The next stop was over on the other side of Chinatown, in an area both traditional and being developed. The newer part is a redeveloped bend in the river, something that could become a smaller version of the eateries on the Singapore River.

Here there is a small luna park (well, ferris wheel at least) and a newly finished ‘corniche’ lit up by trails of blue lights that double in the reflection of the river. The older part is a section by another bend built and maintained in the traditional Malay style of building. Houses are raised on wooden stilts about one meter from the ground. “That’s for the potential flooding, to allow passage of refreshing and healthier air under the wooden floors, and to keep the insects and rats out”, Khaleed explained to me. Just like in Queensland. Same purpose too.

“I’ve read that there are still people here who speak Portuguese. Is that true?” I asked Khaleed. “Indeed there is a Portuguese Colony, though I’m told only some of the old people remember the language. The younger people have lost interest in that part of their past. Do you want to go and see?” With that, off Khaleed pedaled, despite my protesting that it was late and he’d pedaled enough.

Some fifteen minutes later we were going through streets called “Almeida” and “Lisboa”, soon to find ourselves by a concrete plaza and large sign celebrating the ‘Fiesta Fan Juan e Pedro’. “Only one Portuguese word in that” I said, “the rest is Spanish”. “Well I told you …” came the reply.

We cycled up to a plaza by the sea wall where a small restaurant was still serving drinks to the few people that chatted and played music by the plastic tables. “Two mango juices please! And by the way, do you speak Portuguese?” “No” responded the tired waitress with a shrug. So much for that then.

A reflection on the night sea as the lights of the fishing boats bobbed on the horizon. Then back to the hotel. Three and a half hours rickshawed around Malacca on a soft, warm night. Guided by the best of company too. What better way to begin to know Malacca? 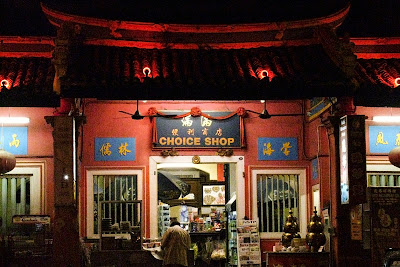