Saturday morning Ilham came by. We had no specific plan so in the end we decided to grab a train and head out to Bandung. I had been reading something of the history of Java and thought we were heading to Bantem. So for me the voyage turned out to be a ery pleasant surprise – we were headed into the interior of the island, through valleys and across hills, higher and higher until the air of the Jakarta plain gave way to bright, light, exhiliarating fresh air of the central highlands.

All around the hills were greener, the flowers more colorful, the buildings more spacious and the villages more beautifully set than i would have imagined.

Ilham told me that most people from Jakarta head for the hills every weekend in order to relax, visit family and generally get away from the constant buzz of the city. I can understand.

At the station Ilham negotiated a taxi for the day – all of 250,000 rupiah (less than 25 dollars). We jumped aboard and headed out of Bandung for a restaurant he knew of further up in the hills behind the town itself.

We were in the period of Ramadhan so I wasn’t sure that there would be much on offer. It turns out that Indonesians are less rigid about observing the daily fast than in the Gulf, so, embarrassingly, there was plenty to choose from, although the number of guests were few.

Lunch over, I asked the local manager what there was to see in the area, other than some much-quoted, totally forgettable conference hall that was built for an international summit many decades ago. Not much, was the answer.

Ilham hit on the idea of heading for the place where the strawberries we had eaten for dessert were grown. Evidently these are grown locally and the area is famous for them. That really surprised me, so it sounded like a great, totally off-the wall way of seeing something.

And we did – the taxi driver got delightfully lost on the roads that wind through and over the hill tops behind Bandung. So what I saw were the beautifully kept villages and verandahed houses with gardens of mangoes and papayas that seem to be a hallmark of Java. The people were well dressed, well fed and obviously content. Kids played in the open spaces between one house and another; in one more open area monkeys were cavorting.

Up and down we went, past nurseries full of all the plants and flowers that you normally buy in the supermarkets and garden malls of Europe. So this is where they come from, al those ficus, alanchoe and red leaved climbers. Only here they look so much more natural, sheltered by veritable halls of ‘geenhouses’, here made of bamboo and used more to shelter the plants from the direct sun than to encourage then they are back on a warm, tropical island.

Every time the taxi driver asked if anyone knew the way to the strawberry plantation they smiled and pointed over the next hill. Eventually we saw some signs and, continuing our way through this open labyrinth, we eventually came upon a steep hill overshadowing a small, deep and narrow vale. Here it was, Rumah Stroberi, the source of our luchtime strawberies.

Rumah Stoberi knows how to market its strawberries. Here there is a garden restaurant where you can have a dish of them, drink strawberry sharbat or have them as a milkshake, following if you like, with strawberry tart or ice cream. Or both, whichever takes your fancy.

The garden is obviously used for parties – and I suspect very good ones too. There’s a store where you can buy fresh, conserved and frozen strawberries, in a basket, in a box, in a jar and in a bag – all with strawberry designs and logos. There are strawberry trinkets, magnetic buttons, lamps and other souvenirs that are at the same level of commercial excellence and pushiness as ever I’ve seen at Marineworld or Disneyland. What great vision and purpose in introducing a (strawberry) slice of the entrepreneurial spirit here, in a quiet, almost idyllic, vale in the heart of Java.

The afternoon quickly muted into evening, then evening into night. We were back at the station, a little bit early so we went to a snickets store Ilham knew of, bought a whole bunch of stuff that ruins a diet and headed back to the station. The train turned up and left on time (something I’ve gotten used to in SE Asia is that the infrastructure, even if modest, works). Most of the time I dozed, as I always do when I’m a passenger in something and there’s nothing much to see out.

Back in Jakarta we jumped into a rickshaw taxi that works more or less like the ones in India, headed to the hotel and, since it was too late for dinner, crashed. 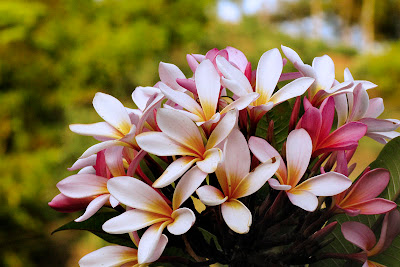