A tourist in Lima

Given the early start and late end yesterday, I decided to take today very easy and be a tourist in Lima.

Around 9am I walked back up to the Plaza Mayor, through the pedestrian precinct that was still shuttered (evidently things don’t start that early here either. I had been wondering how to organize my trip around Peru after seeing Lima. The best way seemed to ask a travel agency what was the best way to get around, so I found one and set up the net phase of my travels here (you can read how it works out later). 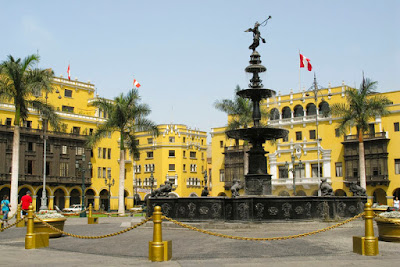 The Plaza Mayor in the center of Lima

I crossed the Plaza Mayor a few times, looking at the sights in the nearby streets and the way the fast rising sun changed the yellow of the public buildings from a canary to an intense cadmium.

A group of traditionally dressed Indios were standing on the steps of the Cathedral, one of them with a long horn which he raised up high over the others and blew from time to time. I asked them if this was a special event or festival they were celebrating. ‘No,’ was the reply of two women at once, ‘we just want to walk around and let some tourists take photographs. You want to take a photo? How much money will you give us?’ Well, I had the photos already so I thanked them kindly and headed off to see the Cathedral itself.

It costs 10 soles (a bit less than 3 US$ at time of writing) to visit the Cathedral. Thanks to earthquakes the building has been rebuilt several times, so the interior is more the stark 1880s version than the older Baroque version, even though it appears Baroque on the outside. The decor is more muted than I would have expected too; the most beautiful pieces being some painted and gilded wood statues.

But what really got me was that, just to the right of the entrance, lies the sarcophagus, coffin and body of Francisco Pizarro. I was standing in front of the direct link to 500 years of European history in South America. There was the Spanish Conquistador himself. Unbelievable.

Doubly so. As some of you know, I lived in Mexico for over two years. Mexico and Peru were the two Viceroyalties of Spanish America, so I am obliged for both reasons to use Mexico as my point of comparison for Peru. Never in a million years would Mexico put Hernan Cortes in a sarcophagus and celebrate his feats in the capital’s cathedral as here I see before me in Peru (someone please correct me if I’m wrong – I don’t for the life of me remember seeing such a thing).

So here is something different – though both countries are a cultural and racial fusion of Indios and Europeans, does the European power still exert itself more openly in Peru?

On leaving the cathedral I walked up a street, the presidential palace on my left. I hadn’t had breakfast yet and on the corner of the street just past the palace was a old style cafe, called Cordaro. One espresso please! Yes, the short one. Gracias! Looking at the photos on the wall the bar hadn’t changed much in a hundred years. Given its proximity to the center of political power, it must have seen many events in its lifetime. While I was there an Indian trail of tourists walked into the bar from the entrance on one street, past the bar counter and out the other door on the other street. The bar tenders just looked on, as though this was something to be suffered, like waiting for traffic to pass by. Most surreal. 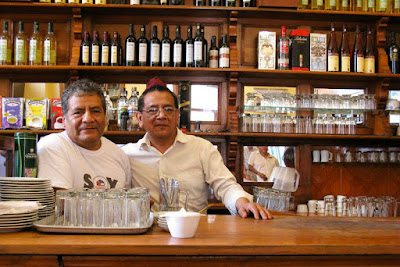 I walked on up past the stores selling Indio souvenirs up to the monastery of San Francisco. This is one of Lima’s oldest standing structures, though even this has had to be rebuilt several times thanks to tremblors. Large, heavy, dedicated to religion as only exists in Latin America. Room upon room of artefacts. For me the most interesting was the (rebuilt) wooden dome, the geometric design pure Moorish, and the arched courtyards, with their many tiled walls and verdant gardens. With their two floors, its built like the many monasteries and hospitals I saw in Mexico.

The tour ended with a trip to the ‘Catacumbos’ – the underfloor crypt where many people were once buried, the tradition being that if you were buried under a church, then your chances of getting past the Pearly Gates were significantly improved and you would be on the highway to resurrection come Judgment Day. Well, not since 1821 when San Martin banned the practice. You can see the pits and the ossuaries, if you have a mind to.

Back out in the sunlight I wandered around a few more streets and found myself back at the bar where I had morning coffee. Not by accident. I had seen a delicious haunch of smoked ham on the bar counter earlier: lunch! One delicious sandwich-and-a-half plus an even more delicious half bottle of Peruvian white wine later, and I was happy to head back to the hotel for a siesta.

In the afternoon I returned to the historical center of the city, walking around and generally enjoying seeing the people of Lima as they relaxed on the steps of the cathedral and benches in the garden which is the plaza itself.

The honor guard of the presidential palace announced itself with a brassy blare of trumpets. Many people crowded over to see the ceremony. The band played, a platoon wearing late 19th century cadet uniforms marched smartly out, to be met by another heading in the other direction across the palace’s courtyard. A banner detachment with the flags of Peru and the presidential guard stamped out. The music changed pace, the soldiers performed some impressively coordinated maneuvers, the flags were exchanged and everyone marched back to their positions as though the whole exercise was an exceptionally well crafted clockwork. 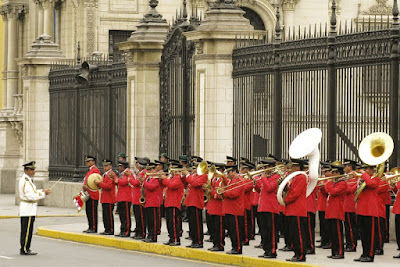 The Band plays for the changing of the guard

I walked back across the square and sat down to continue watching the late Saturday scene. Out of nowhere woman popped up, hand outstretched. With a “Hi! Where are you from?’ she introduced herself as Rosanna and obviously wanted to start a conversation. I was never sure of her purpose, but its always fun starting a conversation. It lasted the better part of the evening as I quizzed her about Peru, Lima, its life and society. She told me one of the places to go to was the north of Peru, up by the border with Ecuador. That’s where the beach-and-surf life is apparently. Very tempting, but my goal is Inca territory. If I have time, though …

I was always aware this could have been for some other purpose from her side, but fortunately it turned out not to be, so in the end her bright chattiness was a delightful complement to the day.