A walk around Lima

I had set my plans: Arequipa by bus in the evening. So today was to see a bit more of Lima before heading off to the bus terminal. In the morning I had arranged to meet up with Svetlana, the guide from yesterday’s tour of the monastery of San Francisco, but there was a sudden press of American tourists from a visiting cruise ship so there was no way she could have freed her herself to tell me more about Machu Picchu. I’ll just have to ask along my way. 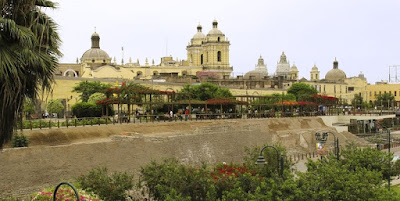 Lima and the old ramparts by the river Rimac

I walked around the back of the monastery. heading towards the Rimac and thinking of taking a couple of shots of the river and, possibly, the shantytown opposite Lima, its brightly painted houses a cascade of color in the dusty desert that surrounds the city.

I found a park where couples were romancing and young children were playing, built atop and below the old river ramparts of the city. The many times breached walls are now some distance from the Rimac, the slightest traces of pathways barely evident amongst the exposed and reconstructed brickwork of their bastions. At key points a descriptive text explains what you are looking at – all done very well.

In the area above the ramparts a group of people in folk dress were finishing a dance. There was a full band and at least ten dancers. I sat down on a bench within the dancing circle, ready with camera. Within about a minute the young woman asked me where I was from. “Norway! I’m a Viking!” Sweet smile from her (I would learn why later in the day). She turned out to be one of the organizers of the group, which were from a place called Colca, as announced by the banner behind them all. 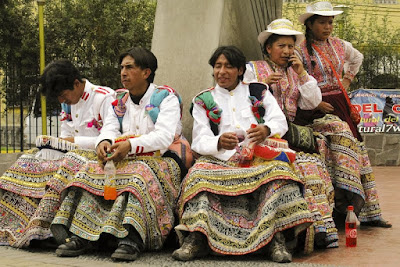 The dancers from Colca take a break

The dancing stopped awhile and several of the dancers stood by the organizer, others sitting down a bench to my left (the band already sitting on a bench to my right). Where was I from? “Norway! I’m a Viking!” Same sweet smiles (so what does Norway do here that people smile? Maybe no-one has a clue where it is). “Do you know where Norway is?” “Yes, up in the north of Europe. What’s the weather like?” “Like the top of that mountain”, I said, pointing to a snow capped mountain painted in the poster proclaiming the Valle del Colca.

“Have you been to the Valle del Colca?” asked Silvia, one of the dancers. “No. Never heard of it before. Tell me about it!” And Silvia did. It’s most beautiful valley in all of Peru, a place where condors fly, the food is wonderful and the people the very best of all Peruvians, especially those from Chivay, which coincidentally is where Silvia and the dancing team come from. I cannot visit Peru without seeing Colca.

“Where are you traveling to from Lima?” was the next question. “To Arequipa, tonight”, I answered. “Excellent! You can visit Colca from Arequipa in a day.” exclaimed Silvia. “Well it’s an idea. I might at that”, I replied, in part for interest an in part for happy politeness, as I was gaining the impression that Peruvians are proud of the home towns, each of which being the most beautiful in all Peru, the food wonderful and its people the very best. This brightens my spirit immensely.

I asked them about their costumes, which are a mix of three elements – almost medievally heavy dresses, light military dress jackets and abundantly rich embroidery. Its local to the Colca area, I was told. And the reason the men wear dresses also?

“No we don’t!” shouted one, raising his skirts to show blue jeans and sneakers underneath his dress. “Yes they do!” chorused the women.

“Its because of an old legend we have”, they continued. ” Long ago invaders came to take and rape our womenfolk. This happened only occasionally but as the beauty of Colca women became to be known, it happened more often. So one night the men of Colca dressed up as women. The invaders attacked again, but this time were met with knives. Never again were we attacked. In celebration of their courage, when dancing our men wear their dresses again.”

“No that’s not it!”, another voice rang out. “It’s because the men of Colca are the most beautiful in Peru!” At which everyone burst out laughing.

I think both stories are true – these are are a bright, happy people with a great sense of fun and spirit. It shines through them and makes them all beautiful.

Soon the dancers from Colca packed up and I walked along the old city walls. From this area you can cross over a metal footbridge to another area near the new river walls. As in most cities, the river that was once its lifegiver and lifetaker has been straightjacketed, Hannibal Lecter style, by thick concrete retaining walls, reducing it to an afterthought and a drain. 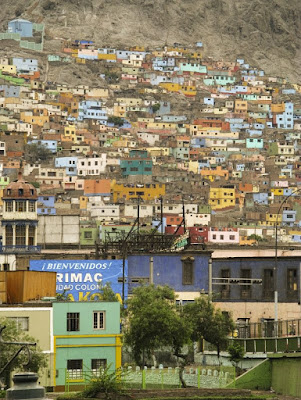 The multi-colored shantyown of San Sebastian

In a walk area by the new river wall I found a lone llama cantering around, trying desperately to ignore the persistence chugging of a miniature train that was pulling local tourists around. I tried to get not-too-close to the llama to take a foto, this being the very first llama I’d ever seen that wasn’t in a cage.

The llama saw me and decided I might have something of interest (or worse, be something of interest). I tacked left, it tacked right. Remembering that I had once heard that llamas are like temperamentally like camels, and knowing camels from my times in Africa, I knew that excessive zeal to get up close (by the animal) could spell disaster (for the human). I started to tack briskly abeam (walk fast away), at which point the damn thing started cantering – in my direction. I headed for the steps of the footbridge, which given these rugs-on-tenpoles are mountain animals, was of course a thoroughly useless gesture.

Just at the moment when the people looking down from the same bridge were with bated breath waiting for the denouement, the moment when I could see close up the llama’s slightly crazy, ice crystal blue eyes glaring from its black muzzle and chocolate coat, the toy train burst on the scene. Its unexpected tinny hoot was enough to frustrate the llama at the point of conquest; with flaring nostril and angry stamp, it wheeled away from me. Alive to fight (and flee) another day!

Back up in the Plaza Mayor it was almost midday, time for the ritual Changing of the Guard. Being a Sunday, this was more elaborate. The band came out of the Presidential Palace’s courtyard and began a the long circuit of the square itself. They were preceded by the squadron of cavalry and followed by the presidential Honor Guard. All most impressive. I didn’t get to ask if the Palace Guard were volunteers or that this was a position of great honor and esteem, as is the case in Norway (one of my friends did this); I will ask next time. 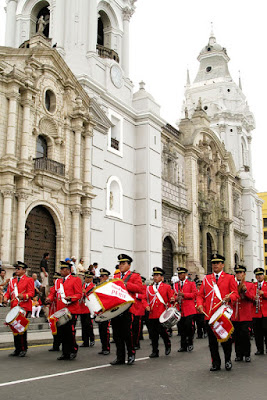 The band marches past Lima’s cathedral in the Plaza Mayor

The ceremony over, I headed back up to what it becoming my favorite bar in Lima for another pork sandwich and glass of red wine. I prefer the smoked pork to the sweet; both wines are great.

Grabbed a cab to the bus terminal, which is to the south of the city. Answered the inevitable question with the inevitable answer. “Hey, do you know we have a saying here in Peru: ‘borracho como vikingo’ (drunk like a Viking). Is it true you all drink till you are drunk?”

Great! Now I know the reasons for the smiles all yesterday and today…. The usual words of explanation and excuse – and a mutual laugh with the cabbie as I told him I’d being saying the same with evident pride these last two days.

The operator I had chosen, Cruz del Sur, has its own bus terminal and its absolutely spectacular, something between a new bank and a new airport terminal. Exchanged voucher for ticket, checked some other information and headed to the upper floor to buy a coffee and some water.

On the off chance I pulled out my iPod to see if there was a WiFi signal. There was! And strong too, from the terminal itself! And free!!!! Oh, why is it that the developing world does the commercially sensible thing and ‘developed’ one is always nickel-and-diming (only not even that cheap)? In a few minutes I was able to get up to speed with everything, post a few mails and check my financials.

Boarding the bus I was amazed. The seats are like the best business class seats in airlines. Multiple audio channels, flip down monitors, intro program, local sites program, then four videos through the evening/night. Snack, dinner, drinks all provided. Seat right back, cushion and coverlet. Stewardesses. Even a bingo game with the prize being a free return ticket.