This is Carnival weekend – five days of non-stop celebration. Unfortunately I’m not in one of the more ‘established’ centers to enjoy Carnival – Belo is not Rio or Salvador – and thanks to work impediments I wasn’t able to book ahead to go somewhere interesting – all full or way too expensive at short notice.

So I resolved to do some day trips based from Belo – and from here its easy to visit the colonial era towns of Minas Gerais. Most of these were developed during the ‘Gold Rush’ of the second half of the 1700’s; places like Ouro Preto and Diamantina.

My first stop, today, was to Congonhas, a small town on the Royal Road that connected Sao Paulo and Rio to the heartland of mining territory. Congonhas do Campo is special for one reason (and one reason alone), namely the Basilica and its surrounding statues scullpted by Aleijandinho, Brazil’s native born baroque era sculpltor.

I’ve been here before, way back in Easter 1996. Then I was with Marcia and we were doing a tour of the region. So this is ‘known’ territory. Not having, or wanting, a rental car, I took the coach.

—oo0oo—
Since Brazil doesn’t have a rail network to speak of many coach operators fill the gap. These all leave from the same terminal in each serviced town; it looks like each operator has an exclusive route, with the exception of travel to principal cities. 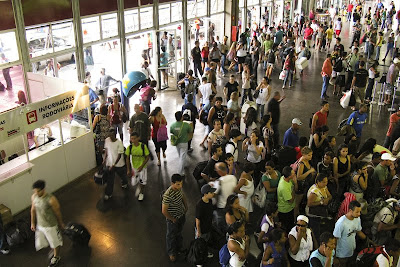 I’d checked out the ‘Rodoviaria’ in Belo on Friday night to see where it was and how it worked. On Friday, thanks to the start of the long Carnival weekend, the queues were wound around people waiting for departures and even out of the doors. Saturday morning turned out to be easier, but many departures were full already.

I booked a trip to Ouro Preto for Sunday and, given there was probably time enough, bought a ticket for the trip to Congonhas today. In the fifty minutes of waiting I walked around the terminal building seeing what I could shoot with my little pocket camera. Not easy, with the press of people and the scarse neon lighting in what is a low dark hall – Niemeyer’s heavy concrete hand is everywhere in public buildings here, constructing caves where there could be light.

The coach turned up almost on time and departed quite quickly. Clean, comfortable with reclining seats and enough room for legs too. Most of the passengers were headed to Congonhas, returning home or to visit relatives for the Carnival.

Since Congonhas is south of Belo we passed by where the offices are, which felt kind of weird. Soon we were beyond the city limits and into steep hill country. Never mountainous, just very hilly. The road was wide most of the way, all the more room for the driver to zip around, given that he intended to stick to the schedule at all costs. We stopped at a couple of other small towns before arriving in Congonhas itself. A short taxi ride and I was up the hill by Aleijandinho’s basilica. 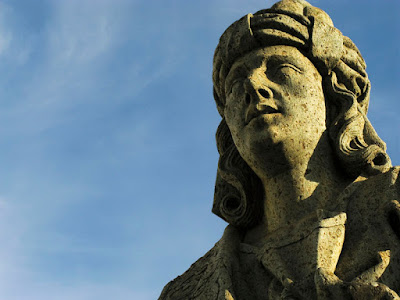 There is a dispute about whether or not Aleijandinho ever existed, or if he did whether he ever did what is ascribed to him, or whether he did it solo or as part of a local studio. The story is that Antonio Lisboa was born in Ouro Preto of a Portuguese carpenter and his African slavewoman, raised with the children of his father’s official family (presumably white) – so he is the archetypal Brazilian and the true reason why he exists. From these beginnings he learned his father’s skills, joined a studio in Ouro Preto, suffered some disease or accident, earned the nickname ‘Aleijandinho’ (Little Cripple) and worked his life away sculpting façades and statues for the local churches.

Who cares? The work is very beautiful, characterized by the rich textures of the sculpted cloth and the almost Etruscan look of the curved, almond eyes. The stone statues are the true reason to come to Congonhas.

—oo0oo—
I’ve never been inside the basilica, aka the Sanctuary of the Good Jesus of Matosinhos. From the outside its a delicate, modestly sized church in classic Portuguese late baroque style which serves as a platform and backdrop for the statues. There are evidently twelve of them, all prophets from the Old Testament, each with a large scroll which carries a quote from the same. 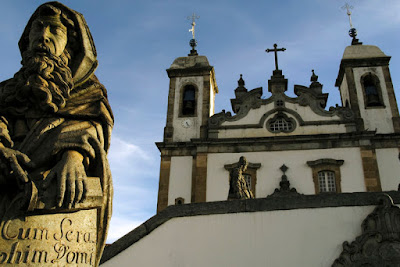 Off the platform on which they all stand, down the sloping hill in front of the basilica, are several kiosks with wooden sculptures inside, from the same period as the statues and depicting several events in Jesus’ life. I think these must be used in processions and are laid in these one room kiosks for people to view, as in a tableau, but these are so dimly lit by the two window slits that in essence they are invisible. They don’t have anything of the quality of the stone statues; just the usual folk-cut emblems of religion. 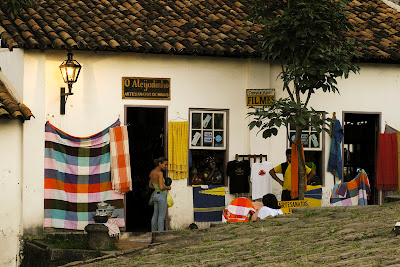 I wandered around the souvenir stalls that lie around the precinct. The houses are quaint, the products the usual selection of miniature prophets and religious reliquaries you’d expect, plus the regional handwork of hammocks, covers and cloths, as well as painted stoneware, a lot of which is quite pretty – and which I bought the last time I was here. 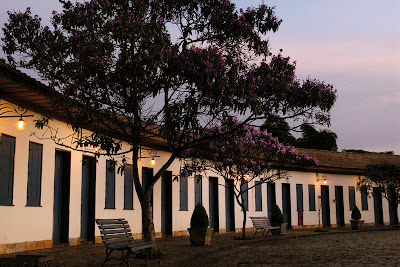 Strolled down the hill to a large circular building enclosing a round plaza call the Romaria. Other than a sensation of being in a low rise amphitheater, I haven’t a clue what Rome might have to do with the name. The Romaria is a very elegant, old style building which I think in part are the public administration offices of the town (the Mayor’s office is there, at least). Its quite a piece of architecture for a small town – human sized and quite impressive for that.

Back up the hill, knowing that the bus back to Belo was at 9pm and it was now 7pm, my stomach kicked in and said ‘dinner’. I was torn between the lower restaurant run by a woman and the upper restaurant, run by a man. The lower was empty, the upper had some people in, so I headed for the upper. The beer I ordered was the most deliciously cold, crisp beer I had had in a long time – perfect for the end of the day (for those that don’t know me, I drink beer very very rarely). The dinner (I played safe and ordered steak and fries) was terrible – warmed up something that someone hadn’t eaten at lunch, masquerading as steak grilled au point.

A taxi took me back to the Rodoviaria, the bus came in on time and by 10:30 I was back in Belo. What a pleasant jaunt out for the day.

Tomorrow I have to be up early – 6am bus to Ouro Preto! 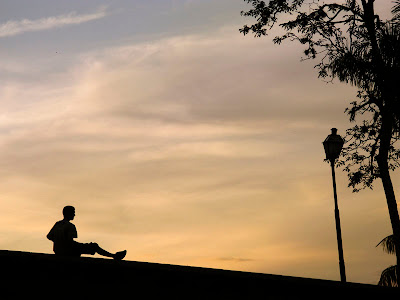