‘Thanks for the ride’, I say to the driver as I’m leaving the bus. ‘Just three questions though, if I may? Thanks. Does the bus leave from here also? And its at 15:30 tomorrow, right? Last one – where’s the old part of town? Straight down the hill. Down that street there. That steep street just there. Well, thanks again!’

So, down the steep street it is then, though I haven’t a clue where its going. All I can see is a bare, rocky ridge across the valley beyond.

The driver was right! Round a big curve I can begin to see terracotta roofs, a patchwork of pastel and there, the twin spires of the cathedral. Instead of being built along the hill’s spine, old Diamantina was built slip-sliding down the hill’s steep slope. Must have been to avoid the bleak wind that must blow in the winter, to be that bit closer to the river for water – and to search for the first diamonds, washed out of cracks in the rocks by the rains, lying there a million years waiting for a man’s hand to reach out and grasp them tight.

The sun still sizzled in the late afternoon air, refreshingly light as the town sits 1200 meters above sea level. There’s always something special about being high up in the tropics; all of the color, richness and variety of the verdant lowlands mixed in with the luminance of a high sky and clear mountain freshness. 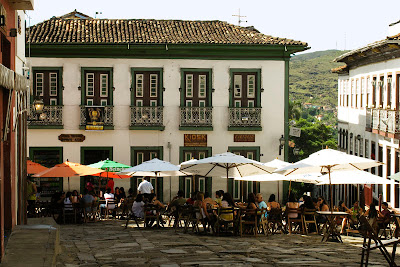 Walked around the town to get my feel of the place, shoot some afternoon photos before the sun faded away over the mountain’s ridge behind the town, and find a place to stay for the night. But five days ago the place had been a-bustle with Carnival; now life was concentrated in a small square between two bars. And noisy too, as though the people didn’t want the buzz to die away too quickly.

As in all of the places on the Estrada Real, the old Royal Road that once lead from Rio de Janeiro and Paraty to just this place, the town’s success is expressed by its baroque churches and trader’s timberframe houses. Diamantina is of the same epoque as Ouro Preto but, like a diamond, it is more expressively lighter than gold. The streets in both tumble down the hillside, but Diamantina’s streets tend to be broader. The churches are pastel, not bold. The houses are wood-and-brick, not wood-and-stone. Same, but different. A delightful unmatching pair.

—oo0oo—
One of the houses I especially sought out was the house of Chica da Silva. Depending on your (in Brazil, often ethnic) point of view, Chica was a heroine or a scandal. Either way, she remains famous 200 years after her death. What she did was, become the provincial governor’s companion and bear him several children. Correct, they didn’t marry. They could have, but convention wouldn’t permit it. You see, she had once been a slave (the governor had bought her and freed her). She was African. And she had had children by her previous owners. Including a priest (well, he would, wouldn’t he). Count the scandals! 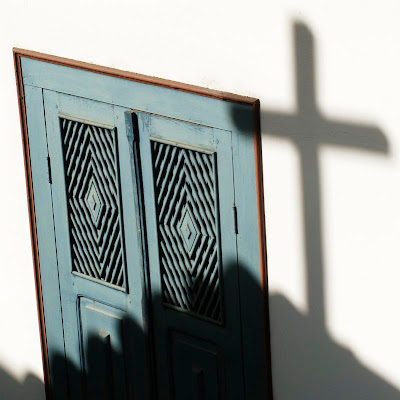 Not that this apparently bothered her much – or the governor. When she was denied access to one of the local churches, as the legend goes, the governor had one put up right next to her house (I checked – there’s a crucifix over the carriage gateway but no identifiable chapel, and the church the Governor did built is down the ways a bit),

Why is this important to me? The second time I lived in Brazil one of the many (eternal) soap operas running on TV that I used to learn the language from was about Chica da Silva. Really well played with the necessary dash of courage, calculation and charisma. And the only soap opera before or since with an African as main character. My five years in Africa and the experiences I saw there and in many places since always, always makes me sensitive to unfair and false discrimination. So, of course, I fell for Chica’s story way back – and had to find her house, once I knew it was here.

The house is now a museum. With hardly anyone there I roamed around the rooms, courtyard and garden at will (there are grapevines here – the first I’ve ever seen in Brazil!). The lower rooms have a paltry collection of broken plates dating from recent times, nothing to do with Chica. The upper rooms have great planks of mahogany for their flooring (I adore this). A few items of furniture from the time (maybe) and several paintings by the same artist depicting Chica in various guises, which if I read correctly are the Seven Deadly Sins. Well, we know which side of the fence this artist is on, anyway. And the local tourist board, despite the tourist Real the legend brings in.

—oo0oo—
The sun was going down quickly now, so I went back to the Pousada (hostel/inn in the old sense of the word) I thought looked the most interesting and attractive, checked in and found it a delight. Would you believe this place still serves a complimentary tea with cakes at sunset? Wondrous! Hospitality! 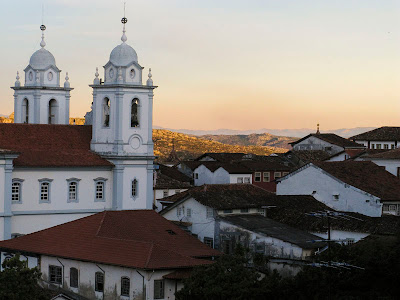 A fast hike back up the hill to take the very last shots possible before twilight closed in, then back to the Pousada for a delectable orange tea and coconut cake in the enclosed courtyard.

At the end, the inn’s attendant invited me and some fellow guests up from Rio (the ladies’ loud nasal voices gave them away) to take a small ‘tour’ of the little museum set up in the house. In this spacious room was set out the story of panning for diamonds (here they were all alluvial, not mined as in Africa or Australia), with equipment and a small diorama. Think panning for gold and you have it. Also on display were the assayer’s and jeweler’s tools, this because the house once belonged to the Nascimentos, assayers and jewelers in the the diamond trade.

Quick turn around the town in the evening, just to discover that it mostly closes down as the night closes in. Then bed, in an old wooden room with mahogany floorboards, large mahogany bed, fresh white sheets, embroidered coverlet, soft fluffy pillows and the gentlest of cool breezes rustling the white linen curtains as I left the sash windows open. Memorable.

Somewhere in the distance a telephone was ringing (and not being answered) constantly.