Since one of the reasons for coming to Diamantina was to take some photos, I was up very early to walk up the hill above the town to see what the dawn would bring. Yesterday evening I had calculated that the sun would come up behind the cathedral’s spires – and sure enough it soon did, first timorously behind a curtain of roiling grey clouds on the far horizon, then in in a blaze of reds and yellows that fired up the sky. 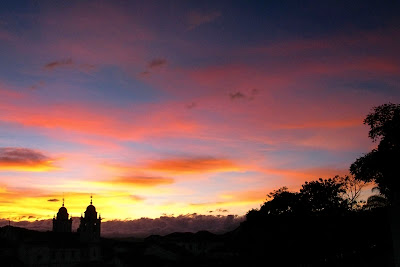 Lazy high clouds were shot through with the molten power of the sun’s hot rays; a foretelling of the hot day to come.

Then ever so quickly the sky turned the palest of pastel dove grey as a screen of misty clouds broke away from the cliffs on the other side of the valley. The sun’s strength took pause as the burst of fire waned to a soft yellow light that gently touched the façades of the houses and hostels.

Within almost no time, this being the tropics, the sun was up high, the sky had turned blue and the once-grey film of clouds a bright fluffy white. For a moment still the light was still soft, but then it was gone; windows shone, shadows lengthened.

I strolled past Chica da Silva’s house again, this time the dark green window frames warmed in the morning’s light. Wondered down past the church to the square where another is being reburbished.

There a man was sitting on a stone plinth, catching the early rays. And as is the habit in country places, we exchanged good mornings. I shot a couple of photos of Valdemar, as he turned out to be named, we both decided they weren’t very good, so I shot another, which wasn’t very good either. He told me about the Camino dos Escravos (The Slaves’ Road), that lead from Diamantina through the district at the bottom of the valley, where he lived, and up over the cliffs on the other side a further 20km to where the main fields once were. Something more to do then! 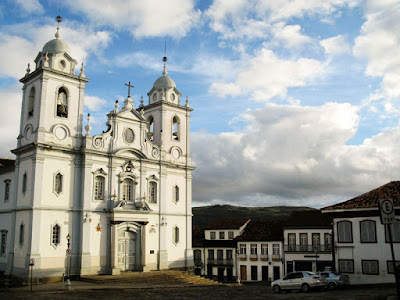 I checked the time. It was barely 8am. So, back to the Pousada for breakfast – grape juice, coffee, coconut cake and pao de queijo, little balls of cheesebread that I adore.

—oo0oo—
I wandered around town some more, then took a taxi out of Diamantina, down the valley through the district where Valdemar lives, up to the big cross that is set on the highest point of the cliffs opposite the town.

Nilton, the truck driver turned cab driver, waved me on as I scrambled out of the cab. ‘Take your time, don’t hurry. I’m happy to sit here and wait for you’. Yes, well he doesn’t know I’m the type of guy who can wait all the time it takes for what I hope is the right moment to take a photo (or ten). Fortunately we fixed the price for the trip before leaving, which I’m sure is inflated for just these moments.

Up here by the concrete and iron hooped cross, the view is wide open. I’m standing on a sharp ridge, one of several, its steep rocky escarpment tumbling down to the left and towards Diamantina in front of me, a rounded hunch curling away on the other. The rocks are grey and flaked, looking rather like old, worn away concrete from a century ago. The scattered clouds paint a pattern of shadows over the town as I shoot for the sunnier gaps. Nilton is going to have to be patient…

From the cross we followed the top of the ridge, keeping the valley on the left. Not much further one there was a graveled parking area. ‘The Camino dos Escravos runs across this road.’ said Nilton. ‘To the right there’s no access but to the left, down that cleft there, you can see the road they made. And don’t bother about me, you can take your time here too.’ 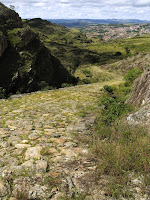 This part of the road is a wide stone road of surprisingly robust construction. Its more like a ramp, made of heavy stones and built up in parts to keep the surface level where the hillsides fall away. This was obviously made for carriages to be drawn up, not a simple pathway for mules and slaves to toil their way to pan for diamonds for the Crown of Portugal (from the 1720s diamond mining was a Crown monopoly). Walking down it the 500 or so meters I did is no effort, but I’m out of breath walking back up. A small stream gurgles by the roadside; no doubt many a slave and freeman took a gulp of the rust tinged water. And checked to see if that glint was a diamond, not just the sun playing tricks with the cascade.

A circuit back into town and I thanked Nilton for the ride. He didn’t hesitate to give me his card, if ever I was back here again. This is a custom of cab drivers here; I appreciate the initiative.

—oo0oo—
The squares in town were all quite empty and most of the stores were shuttered still. It being Sunday, many of the townspeople were in the cathedral, their choruses clearly audible. Strangely, its seems that only the cathedral was open – all the other churches were grimly closed too, as though they also observed the shopkeepers’ hours. 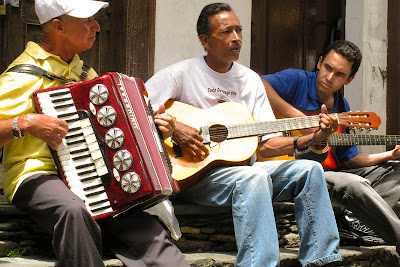 In one street the manager of one enterprising tourist store has laid out fresh coffee for passers by to enjoy, courtesy of the store. I do, of course, and I buy a couple of trinkets for the house, of course. As intended and a pleasure. Just over the alleyway another lady is selling biscuits and cake. To her left a band of four musicians is hitting the notes of what is clearly a well known local song. They switch over to ‘Parabens pra voce’, the Brazilian words for, and sung to the same tune as, ‘Happy birthday to you’. One of the people walking through jumps with surprise and her friends start clapping – its her birthday, and the band were told of it.

Old Maria Teresinha sits on the steps of the bookstore smiling at a small boy who’s sitting there with her. They could be relations, but no, Maria Teresinha was married once but never had children; this is the small son of the store manager.

—oo0oo—
Going back to the Pousada I find that the owners are there. I compliment them on the beauty of the place, only to find that he is the fourth generation Nascimento, great-grandson of the assayer who first owned the house, and his wife is the daughter of a local writer and photographer, Couto (who’s book I had riffled through just after breakfast).

Now there’s one thing I want to buy, but I haven’t found it yet. At tea yesterday and breakfast today, fine lace doilies with heavy beads sewn along the rims were placed over the dishes of food and jugs of juice to stop flies crawling in. Now I know what those things are for! Where can I buy some? ‘Oh you can’t, these aren’t made in stores – my grandmother made them’, said the Senhora. What a graceful touch, something from the family used to make a guest’s stay more agreeable. ‘Ah but if you go to this store,’ Senhor Nascimento says, holding out a card for me to take, ‘then you may find some interesting artisan work there’. 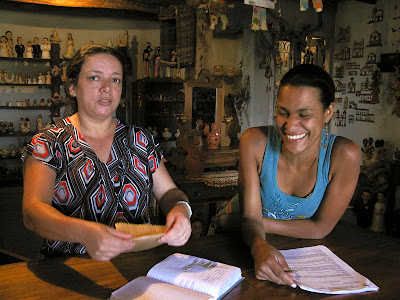 The store is just along the street so I stop by. I explain my need to Rosa, one of the shopkeepers. ‘No, we don’t have those. We do have normal lace placers, if you like those’. I take a look, paint a rim of heavy beads stitched around them in my mind’s eye. ‘I’ll have four please!’ Rosa packages them up while Christiane, her colleague, complains about the cold. ‘Yes it does get quite cold here in the winter time’, she replies when I ask the question. Then we get into where I’m from and how can I support this heat.

—oo0oo—
I walk down to the square where the public market is, with its red painted horse posts. There a small restaurant is open (I had a beer there yesterday), so I have lunch – the usual steak with fries, rice and some sauces – and a cold beer. That’s three in a week – record! 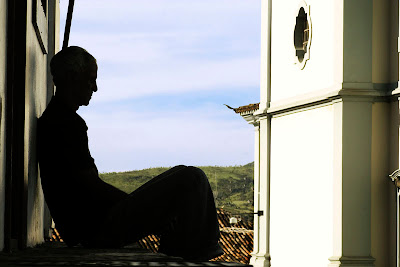 It’s too early to walk up to the Rodoviaria, so seeing others sitting there, including the cab driver, I clamber into the shade along one line of stores by the cathedral. Nilton leaves and the person he was talking to asks where I’m from. ‘Norway’, I reply, ‘do you know where it is?’. ‘Certainly I do! I’m from Greece!’.

Athanasios emigrated with his four elder brothers to Brazil from a dirt poor existence in the Peloponnese way back in 1958, when he was 18. What brought them over was a merchant who knew his eldest brother and suggested Brazil to them when the last great wave of emigration to Brazil occurred in the late 50s and early 60s. Eventually he and some of his brothers wound up in Diamantina, shopkeepers. As we talked his daughter drove by and stopped; she had just come back from a vacation to the coast. He told me that he had been back to Greece three years ago, and was amazed by how it had changed in fifty years. As we gazed out over Diamantina’s placid, landlocked plaza, he went silent for a while, the lines in his tanned face just a little more tense.

Soon we all had to go our ways, me to the Rodoviaria and the six hour bus ride back to Belo Horizonte.

—oo0oo—
The coach turned up on time, I managed to get a window seat again. With the glass slid right back I could see the broad open country turn to bare hill top, to grazing land, to pasture land and to farming land. Locals clambered aboard and clambered down again as their stops came up. One of them I recognized from Saturday, when he also ridden a short ways on the coach. He looked the image of the classic Brazilian ranch hand, curled up hat and bright blue jeans. 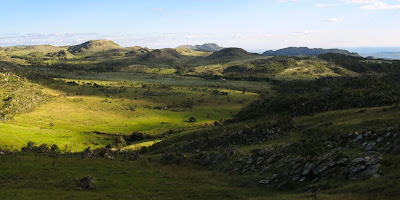 Just after the stop in Curvelo the last of the light died and the rest of the way was in soft night of the Brazilian hill country. My iPod held out all the way as I watched ‘Amor en el Tiempo de Colera’, a film that manages to miss every spark of Garcia Marquez’ magic and doesn’t even have its own softness like ‘Para Agua comc Chocolate’.

Back in the apartment and I begin sorting out the almost 700 photos I’ve shot in little more than 36 hours.