My first day in Lima

After lunch and a quick siesta to stay out of the midday heat and recover from being up since 2:30, I asked Miguel and Christian, the two guys handling the front desk, how to get from the hotel to the Plaza Mayor (Main Square) of Lima, which I knew to be walking distance.

Omar, Miguel’s cousin who was giving them a hand, said that he had to go in that direction and would show me the way. Nothing better! 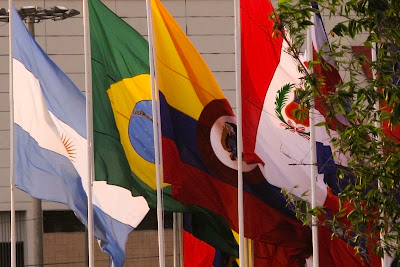 So we walked along the roads, most of which are being dug up and relaid as part of an urban renovation project, past the central police station (just by the hotel) over a main road towards the Palace of Justice (central court), by the brutal concrete horror that goes by the name of the Sheraton Hotel and whose only value is that its the tallest building around so serves as a good point of reference, up by an abandoned green monster that once was a hotel but now is, well, no-one knows, up a pedestrian precinct called Jiron de la Union that reminds me of the one in Buenos Aires, full of shops and eateries that pretend to the image of North Rodeo Drive but don’t quite get there, and into the Plaza Mayor.

The great thing about all Spanish (colonial) towns is they always have a heart, and that heart is around the Plaza Mayor (sometimes known as a Zocalo in Mexico and often as the Plaza de las Armas in many other places). Here you will always find the principal church, the center of political power and a generalized collection of stores, restaurants. hotels etc.

Lima is no exception – to the right as I walked into the square is the Cathedral, in front of the President’s Palace. The other two sides of the square are large porticoed buildings, painted a rich, bright yellow, the window frames a stark, brilliant white. What distinguished them are the dark brown, wooden cassonnetted balconies – high boxes of wooden grills in the southern Spanish style, influenced deeply by Moorish architecture. And here it is, half a world away.

Omar explained to me that Lima has been reduced to almost rubble by earthquakes a number of times, including recently, so a lot of the freshness I see is because of the recent reconstruction, as well as initiatives over recent years to make the place more livable. Lima holds one third of Peru’s population, so the logistics of city planning are immense.

This I discovered for myself soon after, because as we finished a short tour of the President’s Palace, Omar suggested we go to meet up with his girlfriend and see a regional folklore festival in the south of town. I was more than happy to see something like that, not least the opportunity to see traditional dance from Peru.

We crossed the Rimac River to the stand of ‘colectivos’, white painted minibuses with room for 12 people that are the principal means of transport for workers here. Most people don’t live in the center – they live in the great arching rim around the city; north, east and south (the west being the ocean).

One driver and one conductor/hustler, bawling out where they are headed to all who may want to go that way. So, four hours after landing, I’m whizzing around the roads of Lima in a colectivo just like any other commuter.

Quite some distance away, in the southern part of town, is a recreational park. It was founded, unbelievably, 80 years ago, for the purpose of giving people a green are to relax in, the area surrounding of Lima being arid hills and dusty plains. 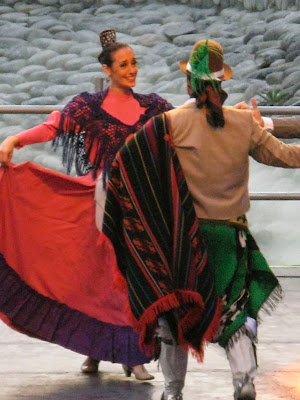 I didn’t see all the show – it started at 6pm ad was still going strong at 10:30pm, when we all headed to a Chinese restaurant over the way. The show started with Argentina, singer then dance. Other than some brilliantly executed tango, which got raucous applause from the Peruvian crowd, the Argentinians danced to music from the pampas – gaucho music. Excellent choreographer, superb skill.

Then the Brazilians came on – not samba (except one song the very end) but music and dance from their southernmost province, Rio Grande do Sul, which abuts Argentina and Uruguay. Omar commented on the irony of my seeing this, having just flown in from Brazil. I commented on the double irony of being able to see traditional folk dance from Brazil somewhere else, given its never shown in Brazil! Except for the street version of samba of course.

The Peruvians appeared. Dressed like Amerindians, the first show a pure African beat, with pure African dance movement. 100% Guinea. Even the flute sounded like griot. Omar told me it was a dance from the north of the country based on the slave tradition, many Africans having been shipped to the ports. Then there were several more obviously ‘colonial’ pieces, a concoction representing the Amazon, then a delightful dance where the woman is courted by the man, her mother watching on and interfering, both women dancing with jugs of water balanced atop their heads. So graceful. What a delight!

Finally, before we left to eat dinner, the Chileans came on, first with some ranchero style dances and then, since they have islands way out in the Pacific, dances that I recognized as Samoan and Tahitian. If I’d seen Maoris then I would have thought Chile was stretching its boundaries too far… The Peruvian audience were fascinating by the different music and dance of those far away places that, for a quirk of history, belong their southern neighbor.

Dinner in the Chinese restaurant, good byes all round and I was back in the hotel.