The nice thing about an airport at this time of the morning is that there are few people meandering around, the other is the airplane tends to be at the airport already, so its entirely possible that it might take off on time (which for TAM and service in Brazil in general is quite rare). The downside is that most everyone is still waking up, so service is slow. This time it was friendly and fast. I got caught at the pass control trying to smuggle a stick of deodorant through (OK, its Armani) but the real purpose was to oblige me to buy a transparent plastic bag for 2 Reals. Man, do places like this adore the recent rules on security (which are totally ineffectual). Not just Brazil of course, but I really don’t like the system here, with the pervasive, invasive presence of the state and its complicit operators, using every opportunity to pull money from your pocket. Grrrrr.

Landed in Sao Paulo. Since the connecting flight to Lima was only one hour from planned landing time, during the flight from Belo I asked (insisted) there was someone at the gate at Sao Paulo to take me through to the gate for Lima, this to avoid my going through domestic baggage claim and re-enter the circus of controls. I was assured there would be someone at the gate. Of course, we did not pull into a conventional gate, we disembarked from buses. Naturally there was no-one at the bus or at the pull-in or anywhere else. So I had to re-run the circus as though I had just stepped off the bus from Sao Paulo city. This is typical.

Like most everyone nowadays, I begin to hate the ‘airport’ part of any journey. Brazil’s airports are bad. Sao Paulo is the worst. (No. maybe Rio de Janeiro airport is – I can never decide which I hate most.)

Eventually we took off and I stopped steaming. 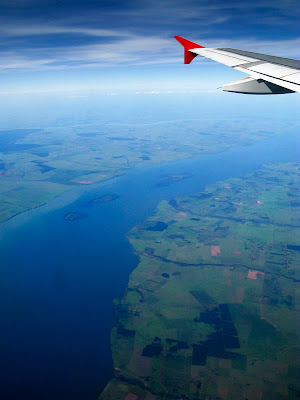 Flying over the Paraná in Brazil

The flight across Brazil was amazing. As always, as you fly over Brazil you begin to appreciate the sheer size of the place, and what a powerful potential it always has. Here the flight crosses the lower section of the country, eventually angling up over the Andes towards the southern border of Peru.

Most of the way, I see rolling countryside, grazing and crops. Small towns are everywhere. Every so often middle sized rivers meander through these fields. The scenery goes a little more hilly – cattle country here, with lonely ranches dotting the hills. The land flattens out again and is much greener; sometimes its woodland but mostly its farmland. We cross cross one enormous river (I discovered this to be the Paraná) and very soon after a second large river with a town built close to its shores, looking for all the world like the radially splashed shards of an impact crater (I discovered this was Santa Cruz in Bolivia), so alien is it in the great expanse of green that surrounds the town. 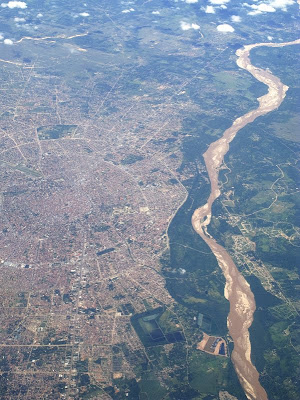 A short while after the scenery starts to go more wild. Yet, amongst this wildness, there are still plantations: enormous squares, diamonds and grids cut viciously into the depths of forest. Long, straight bare roads connect them but there is no apparent centers of habitation near them. Are these deliberately remote research stations, experimenting with crops that could be the basis of future economic development? Are they another state project or private initiative, as has happened in the past? I don’t know. Very unearthly seeing this though. So deeply remote as to be secretive.

The foothills of the Andes appear below me. The green fragments as great mountains break the power of the Amazon forest. Ravines disgorge torrents of fast flowing water, cascading white over the rocks until muddied in the myriad rivers at the forest’s edge.

Clouds steam around the bare peaks, breaking only where the mountains stretch high enough to escape their clammy grip. A few breaks in the clouds and I can see snow capped peaks below me, their steep cliffs falling away into the misty void below.

We are over the main ridge of the Andes quite fast; the Peruvian side a high, dry plateau. Here deep canyons and high sided valleys break the olive and ocher ground into great decks. The area looks shorn of settlements; little seems to grow here. 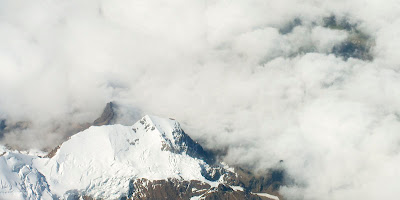 Flying over a ridge of snow topped mountains, in the distance off to my left I can see a high, solitary volcano, its white top well clear of the clouds. I think this must be Tacora, the almost 6000 meter volcano in the very north of Chile, just south of the border with Peru. I know where I am!

Below me the land has turned to desert, as dry, harsh and unforgiving as anything I saw flying over Baluchistan to the way to Kandahar. There’s nothing here, only angry colors as the land bakes in the stark light of the sun.

Within a moment there is a deep blue below me. We are over the sea – the Pacific Ocean!

The plane turned and began to follow the Peruvian coast up towards Lima. This is desert and sea. Nothing else. one solitary road winds its way over rocky bluffs, through sandy bays, along gullies that occasionally might become life giving streams or death giving torrents. Just occasionally could I see some isolated settlements, huddled in a low valley with a smudge of dust faded green around them. 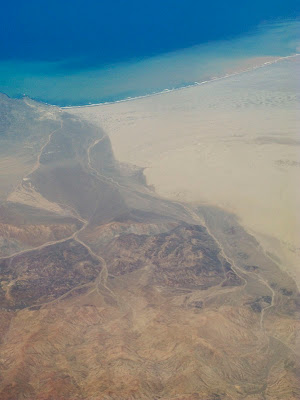 The arid coast of Peru

It was desert right up to when we flew over Lima, sitting in its dusty plain as though Cairo had been transplanted from the Nile to the Sea. A circle over Callao, Lima’s port, a turn back and we had landed at Lima.

Through customs and baggage claim (easy – I’m traveling with a back pack only) in the light, airy, clean Jorge Chavez Airport. The taxi driver the hotel I had arranged to stay with wasn’t there, so I took an official one.

The cab driver talked me through the town – ‘this is Callao, the port of Lima. Now we are one the main road to Lima center. By the way, do you have a hotel room yet? In the center? But there’s nothing there, only some old buildings! Why not Miraflores? its modern with good shops… Oh, so you like the old stuff and your hotel is in the center. That you may enjoy Lima then!’

The hotel ‘Hostal de las Artes’ was simple and welcoming. Dumped my bag and had lunch in the restaurant attached (good food, very economical) before taking my first walk in Peru.