Up early to walk down through deserted streets once more to the Rodoviaria, this time for Ouro Preto.

Ouro Preto (Black Gold) was once called Vila Rica (Rich Town) because its entire reason for existing was as a result of finding gold in the hills around it in the mid 1700s. If I recall correctly, the fist gold was alluvial; the gold diggers soon had their slave gangs burrowing inside the hills for more. If you have ever seen fotos of the army of ‘garimpeiros’, men covered by the mud of sluiced down hillsides as they scrabble for nuggets, then this was the true face of Ouro Preto.

Even now, as the bus screams around every curve of the highway on the way to Ouro Preto (I’m sure all bus drivers here think they are White Rabbits, convinced they are late, terribly late), I can see that there is mining activity in the region. Now of course its a more industrial affair – open mechanical strip mining owned and managed by the state/federal government. The gold diggers sit in public offices now. 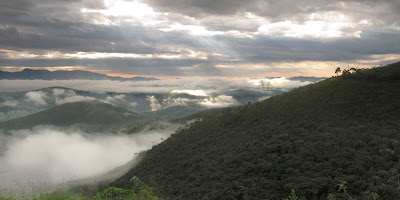 While the road to Congonhas slipped through hilly country, the road to Ouro Preto is altogether more mountainous. Nowadays the views are quite open, the still forested valleys releasing a long breath of mist as the sun begins to warm up the air. Imagine what it was like 300 years ago when the first of those enterprising sons of Sao Paulo, the ‘Bandeirantes’ (Bannermen) who were the first colonists to strike inland, struggled through wild, original jungle forest, slashing a path to their El Dorado without ever being able to get to a viewpoint to see where they really were.

The forest around Ouro Preto is long gone; cleared for settlement and grazing. The city itself is picture perfect, a traditional Portuguese fishing village transported whole and plopped down entire and complete in a tropical heartland. Literally the only things missing are the cry of seagulls and the roll of the ocean. 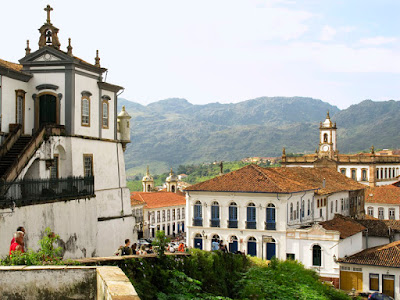 The people who built it up were, of course, the wealthy mineowners and the merchant who settled in the town to sell the provisions miners needed – assay offices, equipment, slaves. With their surfeit of wealth the place became a boom town, like Manaus, Klondike and Potosí. People settled, families were born, ladies of the household wanted the latest fashion and the Church was graced by the building of several edifices in splendid late Baroque style.

Which is where Aleijandinho’s father comes into the story, emigrating from what would have been a relatively poor existence in Portugal to Brazil because his skills as carpenter were sorely needed in the construction of what we see today. Rather like a Brit going to Dubai nowadays (or yesterday, nowadays being what they are).

—oo0oo—
Since the bus left Belo at 6am, I’m here in Ouro Preto quite early – 8am – which was as planned so I could shoot some photos at a cooler and more interesting time of day. The sun was climbing fast in the sky, but on the other hand its power was often mitigated by many clouds, some almost Alpine in white fluffiness, others dirty grey laundry suds glowering with menace. A typical summer’s day in Minas Gerais then. 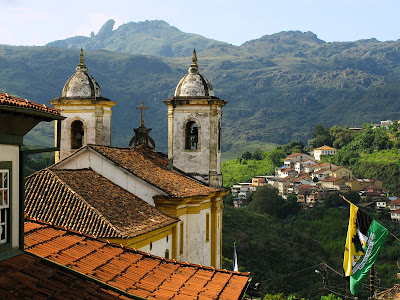 I wandered around the streets, plazas and terraces, snapping away. One of the most unusual natural features is a cone of rock perched high up on the mountain opposite the town, its singular shape and oblique angle making it look like an elongated darvish’s cap or, to be current, like an alien spacecraft crashed as in the movie Independence Day.

Ouro Preto also holds a Carnival, but unlike Rio with its regimented samba parade or Salvador with its trios blaring samba from truck drawn floats, Ouro seems to be an altogether more informal affair. Here college students (from where, I don’t know) rent apartments/rooms and set up ‘Republicas’, complete with logo and banner fixed to balconies, where they revel and use as a base station during the festival.

At 8am of course, only a couple of diehards were still a-reveling. Most were in their Republics sleeping Saturday off, and not a few had chosen to let the sun of Sunday raise them from where they laid themselves to rest on the Saturday night – whether that be parapets, doorways or the cobblestones of the main plaza itself. The more professional drunks were recognizable not only by their disheveled appearance, but also by the blisters of too much time spent sprawled under the unforgiving sun.

Between scrambling over walls and things, I broke for breakfast, which was a truly delightful coffee with green cardamom (tossed in whole – I’ll remember that) and a warn cake of raisins and cinnamon soaked in a sugary syrup. I have to find the recipe to that – it’s unforgettably good. 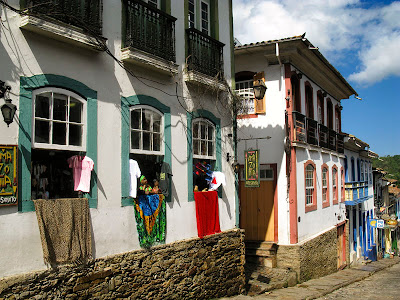 Walked around the streets some more, which by now were beginning to come alive as shutters opened and the perkier of the students began the day. By 11am the sun was strong and the clouds had declared a truce. I headed for the best point in town to watch the town and its people – the platform on which the column to Tiradentes stands.

When my body said ‘enough already with sitting on a stone!’ I moved off and walked around some more, snapping shots of people. By 2pm the whole town was buzzing with the expectation of the excitement to come. The street stalls and solo traders were open by now, with sizzling skewers and caipirinha, hot dogs and icy beer for all. Soon after the music started up, not live – that was for later, in the evening – but the ‘classic’ pop and samba songs that got people jigging (too early for the full-blown everyone-together samba that marks Carnival here). 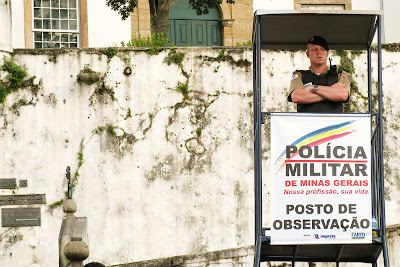 A convoy of police vans arrived, the visibly unhappy cops piled out and went their different ways to make sure the crows stayed happy but safe. At several key points several of them clambered up to temporary observation posts set in the plaza and principal streets. Actually not a bad idea – I haven’t seen this at other events and it makes sense. Rather like the beach guards in Australia checking for rip tides and sharks.

In the late afternoon I could see heavy clouds heading fast for Ouro Preto. I also felt my face and forearms to be unnaturally hot and sensitive (I was sunburned!). So, after being the subject of a quick interview by a local TV station (as one of the few foreigners here I was collared by an enterprising and lovely reporter) and snapping some photos of people who asked them of me, I headed back to the bus station. No, I didn’t stay for the night’s revelries. I thought about it, but all the local pousadas (hotel/hostel/B+B rolled into one) looked full and I wasn’t going to spend a night in the streets. 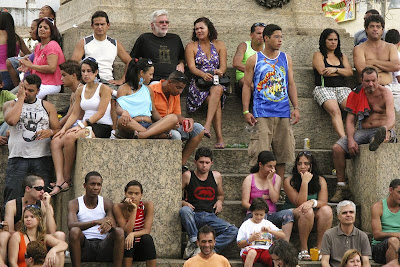 By 8pm I was back in Belo, rolling through the 300+ photos I had taken.

Ouro Preto is a pretty place, and one of the very few that ever were in Brazil. It feels automatically familiar to anyone who has spent time in the Latin/Mediterranean region, a human sized place of wood, stucco and balconies cascading over green hills.

If this were in Europe it would be like Portofino, an expensive locale for wealthy people to buy a small apartment, its streets filled with high quality artisan work and day tourists. In a sense its more lovely than that, as Brazilians don’t hold such places in the same regard, the money generally going on a beachfront high rise apartment, or in a villa in Buzios, or a gated community in Florida. So it is entirely personable. If it were by the sea, then it would be a place to live in. 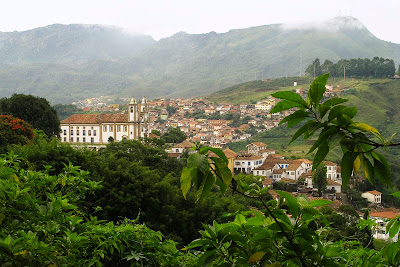