The road to Diamantina 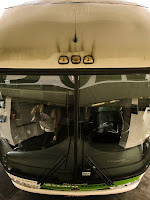 I had tried to travel to Diamantina during the Carnival period but the coaches were full and so ,the teller told me, were the hotels. Which turned out for the best as I found there was work to do anyway. So Friday evening I returned to the Rodoviaria to buy a return ticket for the weekend.

Why go to Diamantina? Because of all the diamonds there, of course. Well, not quite – the town gets its name from the diamonds washed into deposits by the cascading rivers and streams, first found by the same people who found gold in Ouro Preto around 300 years ago. Nowadays its the town they built that draws people, rather than the diamond industry itself, which still exists but is industrialized and remote from the everyday life of the Diamantinines (not Diamantines, though it sounds way easier).

—oo0oo—
Heading north meant heading into much different terrain than the way south to Ouro Preto and Congonhas. No mountains and deep ravines here – this part of the world has been settled by ranchers and foresters, with the occasional steel mill thrown in. There are more small towns too, and rarely the view is devoid of some sort of habitation. 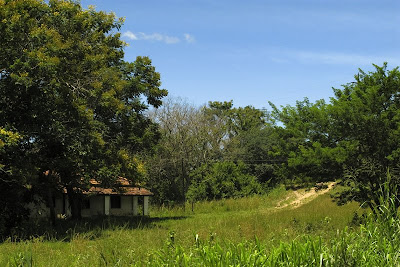 After the relatively steep hills around Belo Horizonte, the land softens, with more gentle open rolling hills. There seems to be an equal mix of open countryside, grazing land, crops (mostly maize/corn) and plantations of eucalyptus. Roll back a couple of hundred years (or less) and these lands must have been woodland, strip burned away like the Amazon basin continues to be today. Past Caetanopolis the earth is as red as South Africa or northern Queensland – rusty laterite full of iron – hence the steel foundries, islands among the plantations of trees.

These transplanted Australian eucalyptus are set so close together that nothing lives underneath their high canopies; only the outermost trees are fully leaved, making each planted section look like a shaggy, upturned box. With their slender, silvereen trunks its like looking through an elven forest. Wish I could stop to wander through, but the coach presses on.

—oo0oo—
Three hours we have traveled non-stop. Now the scenery is much more open, almost savannah. We roll into a town called Curvelo, which seems to be in the heart of rancher territory. Fifteen minutes to stretch legs, have a coffee, check up on the soccer matches screened on wall mounted TVs. Not much of the town to see in that time – plus the Rodoviaria is not centrally located. Back up into the coach and off again. 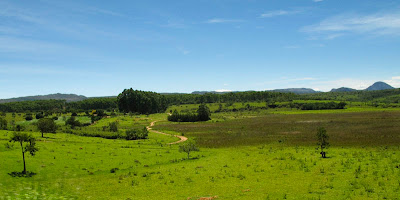 From now on right up to Diamantina the coach would stop at several places along the road; obviously this is one of the ‘local’ buses. The people coming aboard are the farming people and small town traders, young and old, just going a short ways down the road. They are regulars; they all know the driver, the conductor and each other.

Soon after Curvelo we slipped off the main road into a place called Ita……, a country town where houses are for the most part kept prettily clean, the public lawns are flowered and waters, their curbstones painted white and tree trunks daubed with quicklime. The same in Gouveia too, a place just a little larger than Ita… just up the road – almost like the towns in Morocco, with the sun brightening the green and white alike.

—oo0oo—
Between Curvelo and Gouveia the land changes quickly and dramatically. The grasslands give way to rough land spiked with singular grey boulders and broad green ficus bushes. Not that the cattle mind much; they are still tranquilly roaming around, three strands of barbed wire keeping them from short-lived freedom.

Then the stones coalesce into rocky outcrops and the lush vegetation falls right away. I can see miles and miles into the distance, like across the grimly bare hills of Scotland. These are the Brazilian highlands, broad expanses of land that never were jungle (too high for that), but some sort of steppe land, with isolated ranches stretching the land to its utmost as they raise cattle. No wonder the beef here tastes so good.

We slip between treeless plateaux and green river vales, eventually coming over the last ridge and into Diamantina. The little town of Diamonds. 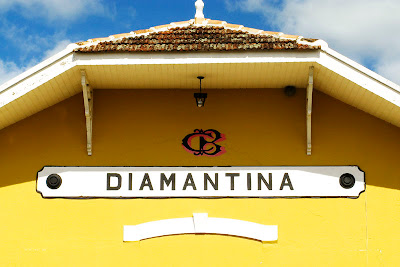