The road to Arequipa

The coach left the terminal on time at 6pm, heading out south into the press of cars on the main roads of Lima. The taxis here, miniature Mazdas, operate like the ones in India, buzzing all over the place; the colectivos swerve around as they pull up for passengers who may, or equally well may not, be at the scheduled bus stops. Sometime later we passed a toll, which formally told us we were on the Panamericana Sur, the great highways the runs the length of the Americas. We sped past the ruins of Panchacamak, one of the pre-Inca settlements that dot the area around Lima, not that I could see anything from my side of the bus, though I could see some small islands offshore. Then, abruptly, the dingy gray, dusty hills gave way to pure desert. The road settled into a winding highway that followed the coast, punctuated every so often with beachside villas and compounds, somewhat reminiscent of southern Italy below Rome. Every bay held a small town, which I hadn’t noticed from the air. The traffic heading back to Lima was intense. Bright headlights lit up the interior of the coach, quickly shuttered out by people pulling closed the curtains.During the night I woke up a few times. Once I think was were going through Pisco, a town by the coast and famous for a distilled liqueur, normally served as part of a cocktail called Pisco Sour. I’ve never had it (yet) so can’t tell you what its like. Another time I think we stopped at Nazca, but it was dark and I couldn’t see anything. One thing that did surprise me was the volume of traffic, and the fact there were quite a few places; this even though I saw so little from the air.I really woke up at around 6am. We were sometimes by the coast, sometimes on a bluff and occasionally inland a bit as the road sliced of a cape or promontory. Shortly we turned inland and I never saw the ocean again. 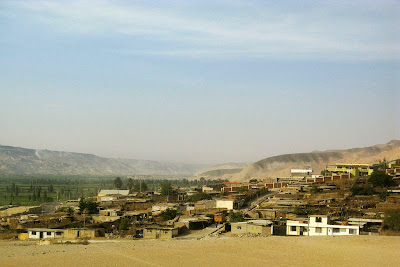 The river valley at Camara

From desert we turned into a low, broad, green valley with rice paddies. We hurtled over the river bridge at Camara and found ourselves immediately back in the desert, right down to the ocean. Again we turned inland, a sign reading 17X km to Arequipa zipping past so fast I didn’t get the last digit. Here the already arid desert sand turned white with patches of what I suppose must be salt or lime. Nothing at all grew here; the earth itself seemed crusted over. Over flat land went the bus, driving past many small crosses planted beside the roadway. People had died here, whether of accidents or thirst I know not. Some minutes later I could see fields of maize, lines of trees acting as barriers against the wind. Another sign whipped by, this time for or to a place called Apiao.

Now the sun was breaking through dawn’s early mist. All around were green fields of maize and sunflowers, irrigation canals, cattle. The bus began a steep descent into a valley, the Massibe gorge, another green valley with a respectable river running through it called the Siuhas. 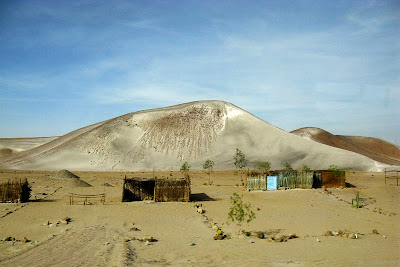 Back into the desert

Climbing back up the other side of the valley we were back in a spectral desert again, the sand dunes formed into regular crescents by the wind blowing up from the ocean. Another descent into a verdant valley, over the river Vitor, the bright green, flat fields surrounded by dry unbounded sand round looking for all the world like a smaller version of the Nile.

This time we clambered out of the flat lands into rocky hill country, the bus swerving abruptly each time we came to a curve in the road – and there were many. Over the top of the last escarpment and I could see, in the far distance, the sharp rise of volcanos. We were heading into Andes territory at last! The vegetation changed too – now, along with the ever present maize, were acacia and cactus. The volcanos of the Andes on the distant horizon

Through a broad valley floor the bus carried on, through cultivated fields interspersed with barren patches. We passed a place called Pampa de Camarones (what are prawns doing here?) and ever so quickly we were obviously in the outskirts of Arequipa.